Overcoming Difficulties in the Ring 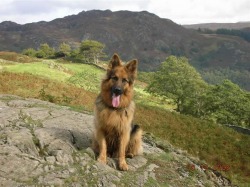 Gabbie is a lovely lady who competes in obedience with her stunningly beautiful German Shepherd, Django. Gabbie asked me to communicate with Django and do some Emotional Freedom Technique (EFT) for him.

Gabbie explained that although they could practice at home in a field and achieve remarkable success in their sport, as soon as they got to the competition and people were watching, both Gabbie and Django would fall apart.
When we discussed the problem, it became clear that Gabbie's father had been a perfectionist, demanding perfection from his daughter.  This meant that she was terrified of making a mistake in front of everyone.  So we tapped (applied EFT) on all sorts of issues surrounding the need to be perfect.  We also visualised a competition, and reduced Gabbie's anxiety surrounding each part of the process: as she drove there in the car; as they walked onto the field; as they anticipated their turn, and so on.  Gabbie reported back that she felt much calmer, but that there was still some tension.

We had another session, tapping on further aspects, including her fear that blushing or doing anything wrong would give the game away, that her nerves would be obvious, and that she would humiliate herself in public.   Gabbie reported back again.  This time, although she felt so calm that fellow competitors even remarked on it, Django was still anxious when they did their sit stays (where he was asked to sit and stay as Gabbie went out of sight).  I was asked to speak to Django and find out what the problem was.  This is what he said:

"I am not the problem.  Gabbie is worried about leaving me, so I am an actor in her drama, doing what she has written into the script.  She just needs to change the script.  She has re-written the bit about not being perfect and her fear of being humiliated.  Now she needs to re-write the part about not being good enough.  She is worried that her training isn't good enough and, because of her own fears, that she has damaged me and made me fearful.  Yet look at me!  I am a strong and intelligent dog.  How could she believe I am too nervous to sit and stay?  She needs to tap on her own fears and I will miraculously be a champion sit stay dog.

"Tell her we see the world not as it is, but as we are.  We create our own reality.  Just as you create your reality and invite people like us into your own play."

I asked Django why he didn't play the part he himself had written.  Was he compelled to be frightened during the sit stay because Gabbie felt she had damaged him?

"Of course I can write my own play, but I know that I am an actor in your and Gabbie's dramas.  I am not limited.  I can be anything I want to be.  But until you write a different script for your own play, the actors will play their parts.  The difference with animals is that we know we are playing a part.  Humans believe their parts.  Knowing sets you free.  I am a healer," he continued.  "All animals are healers.  We come to humans to show them that they are not the illusions they have made.  We are all spirits having a physical experience.  We can create any adventure we choose.  It's all in the playing.  We are free to do and be anything we choose.  We just have to choose."

Some months later, I asked Gabbie for an update on the situation.  She said, “I’ve retired Django from competition work as he has torn his muscles twice.  He does love tracking though, and doing nose work, so we still do a lot of that.  I do think EFT helped us both, primarily for me.  It did calm me down which must have relayed to him.  The last trial I did with him he held his stay OK – he didn’t come to find me, but unfortunately he did sit up in the middle of it!”

Some dogs are just irrepressible, aren’t they.